Inspired by true events, THE RED LINE is a thrilling murder mystery that treads the dark by lanes of international espionage and corrupt defense deals. The exciting story witnesses the journey of an honest cop to discover his true dharma and a brave women army officer’s selfless service for her country. 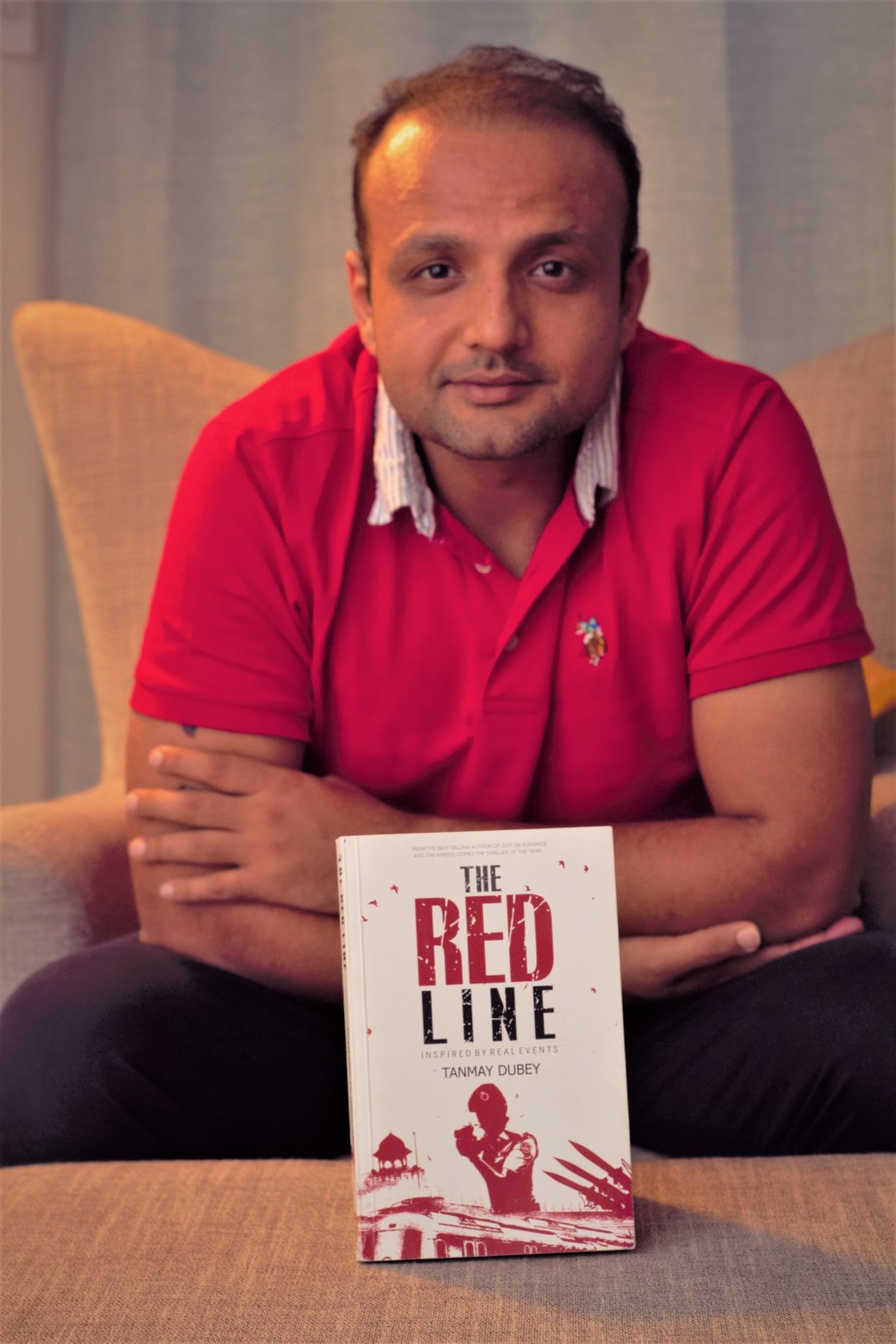 An IT professional based in Gurgaon, Tanmay Dubey is a voracious reader and an avid storyteller. In a career spanning more than ten years, he has been fascinated by several aspects of the corporate world and this book is a result of those observations.When not busy spinning a yarn, Tanmay can be found reviewing latest Bollywood films on his popular Facebook page ‘Tanmay’s Movie Adda’. He is also an enthusiastic cyclist, a randonneur, and loves running marathons. He recently completed the prestigious IRONMAN 70.3 Triathlon in Port Macquarie, Australia.  The race had 1.9km of Open Water Swimming, 90KM of Cycling and 21.07km of Running. He was the Only Indian Participating in the race. He believes that probably he is the only Indian Writer who is an Ironman also 🙂

1) The main character for this book is a woman? Can you tell us more about her?

Yes, one of the main protagonists of the story is a woman. She is a colonel in the Indian Army. Her name is Matrika Rana, she is single, Independent, Brave and a completely honest and dedicated Army officer. She is carrying the legacy of her martyred father by serving in Indian Army. She is beautiful, strong, fit and when life gets her an option to choose her dharma v/s duty. She chooses her dharma of a soldier

2) As the book says it is based on true events can you tell us about the story in short?

Corruption in Defense Arms Procurement is a weed that is eating our System and playing with the lives of fellow countrymen. Be it Bofors  Gun Procurement Scam or the dirt surrounding the latest Rafale Airplane deal. The story is inspired by one such event and the international espionage, cyber-attack which is the new age attack option used by countries against each other.

3) What kind of researcher work or reading you had to do?

The Research took a lot of time, I met officials from Ministry of Defence, read articles about cyber-attack and traveled extensively meeting several people associated with the Indian Army and others that I can’t name to collect facts

4)How much time did you take to complete this book?

I took about 2 years to complete this book

5) What are you working currently on?

I am currently working on a self-help book and expecting to complete in another 6 months’ time.

END_OF_DOCUMENT_TOKEN_TO_BE_REPLACED 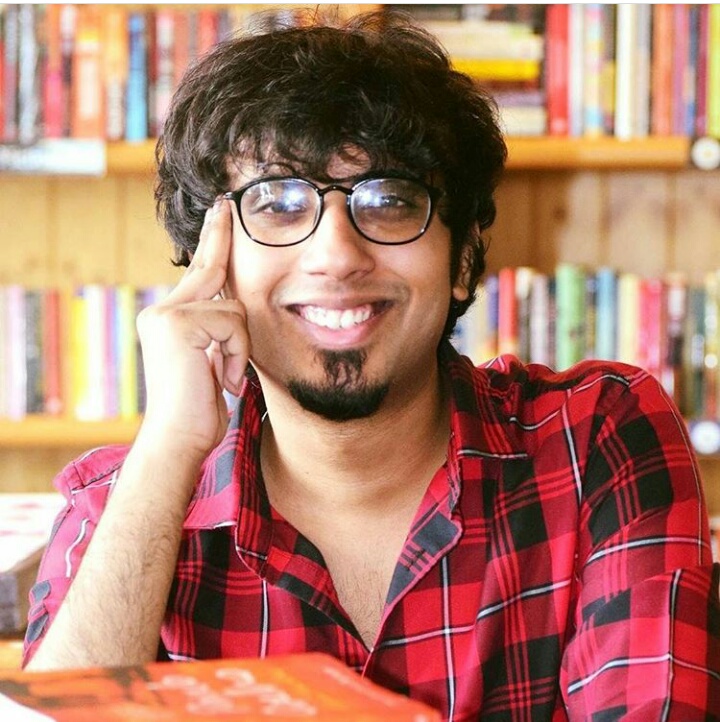 Kevin Missal is a twenty-two year old graduate of St. Stephen’s College. He has previously released the first book of the Kalki Trilogy, Dharmayoddha Kalki: Avatar of Vishnu, which became a National best-seller and received praise from newspapers such as Millennium Post and Sunday Guardian who have termed it as “2017’s mythological phenomenon”. Kevin loves reading, watching films, and building stories in his mind. He lives in New Delhi.

1) Kalki seems to be an extensive book which focuses so much on their characters too. What was your thought process to build them up?
It was about creating enough conflicts, enough pain in their lives that was tough for me. I thought about a character and wondered what was the worst thing I can do to them and then I do it.
We all think Kalki will win in book 1 and he loses and that’s what makes it interesting. Every other book would have shown him as this undefeated hero but I chose to show him weak who’ll grow strong.

END_OF_DOCUMENT_TOKEN_TO_BE_REPLACED

Before we engage the author with questions here are some of the things you should know about him and the book. 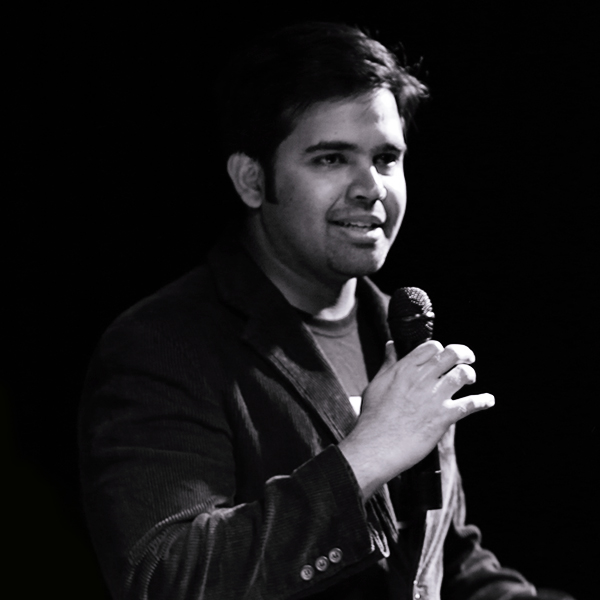 A little about the Author

Dr. Jagdish Chaturvedi has been known all his life by family, friends and peers for being absentminded, impulsive and for making mistakes, failing and causing blunders. Despite this, at the age of 33, he is a well-to-do Ear Nose Throat surgeon and medical device innovator with 18 inventions to date. He was recognized as one of the 35 innovators under the age of 35 by MIT Technology Review in 2016.

He is a well-known stand-up comedian, actor and an author of the best-selling book on medical devices called Inventing Medical Devices: A Perspective from India.

BLURB OF THE BOOK –

In this book, Dr. Chaturvedi shares ten personal anecdotes of mistakes and failures and gives a perspective of his interpretation, where he positions failures as a part of the process rather than a definitive outcome. Explaining with humorous caricatures and situations, he demonstrates numerous benefits that arise from such mistakes, why they are important and how they have helped him shape his career.

Even though the mistakes and failures made by Dr. Chaturvedi may appear trivial and in-significant when compared to those faced by many others in the general population, they highlight the principles of a very unique and positive perspective that may be applied in mistakes and failures of greater magnitudes as well. This book may serve to be food for thought for many who believe that failures are detrimental and that they should be aggressively avoided and not embraced. It may change their minds to think about failures as steps towards success, by showing how key insights from these failures can be used to empower new skills and opportunities.

Now that you know all of this. here we bombard the author with questions and get an insight more about the interesting book.

1)  Tell us a little about the book and what it means to you?
This book is my way of sharing how failures have helped me progress in life faster and more effectively. At the age of 34 if I am a well-to-do doctor, successful Medical device innovator, serial author and stand up comedian then all credit goes to the ability to fail and make mistakes quickly which helped me evolve faster. I don’t think many people realise the benefits of making mistakes and failing. The learnings from mistakes can make one good at things and many such learnings makes one an expert. People generally avoid mistakes and miss out on a chance to improve. Through this book I want to demonstrate how my failures have helped me more than negatively impact me.